First let me just say I’m really enjoying it here so its a little difficult to keep up with the blog. Its only been a couple of days but I feel like I’ve been around or visited this family many times before. Even though we are distant relatives, around 5th generations I feel completely at home here, it has more to do with the kinds of people this family are rather then our relation. It honestly just feels so nice its difficult to fully explain the feeling. Anyways I’ll try to give you an update on what has happened the last couple of days. (I’ve been keeping point form notes so I should remember most things!)

On Sunday I finished cutting the grass in the morning and went to visit Halldóra and her children and Jón Þór’s wife and kids as well with Ólöf. (Guðmundur, Jón Þór, Halldóra and Helgi are Olöf’s children). After our visit we came home for lunch and ate bbq’d horse which was quite tasty. I would most definitely eat it again and would choose it over steak every time (probably). After lunch we headed out to the fields to wrap the hay in plastic. I helped assist Ólöf by taking the ends of plastic after the barrel had been wrapped and tucking it into the rest of the barrel so that it hopefully won’t unravel in the wind. I then would mark the field and date on the barrel and move onto the next. I started to help out a little bit more when it came to milking the cows, my task was to spray the holding room down (get rid of the manure). There was smoked salmon for dinner, and as some friends and my family knows, I’m a sucker for smoked salmon. I had to resist the urge to eat all of it right then and there. I told them that it was one of my favourite foods so Ólöf made sure that there was some still in the fridge for me to snack on if I ever wanted to. (I did and I have, its just too good!) After Guðmundur Guðjónsson (Ólöf’s dad) and Helgi watched the football match between England and Italy while I started a knitting project for one of the boys in the program. When my mom taught me how to knit she taught me…. not a wrong way, but … a different way. So Guðmundur made some comment…. not too sure what but something about how he hadn’t seen anyone knit like that… but it was probably much more colourful then that. Helgi will translate what he says every so often and he uses quite a bit of foul language, I really wish I could understand him! Anyways after the game Helgi, Ólöf’ and I went for a little road trip to see Snorri Sturlusons pool in Reykholt, Hraunfossar – the lava rock waterfalls, Hússafell and one of the old (still used) sheep herding pens. After the trip we enjoyed the hot tub with Helgi’s cousin (and mine too I suppose) Arnar. Fun story, last night I was trying to say Arnar’s name but couldn’t exactly remember how it was said (On top of meeting all these new people I’m also learning so many new names I’ve never heard before). I tried to say Arnie… but then Helgi thought I was saying Army… Anyways, we laughed about that for a bit (Helgi more then me). These darn R’s just are so difficult!

Monday was a big day for family visits. Throughout the day people stopped by for afi Guðmundur’s birthday – he turned 91! You really wouldn’t know that he was 91 though, he is still such a hard working man. He has been out on the fields everyday since I’ve been here. For lunch we had his favourite – skið. If you don’t remember, thats sheep head. I thought I would never have it again after eating it raw last time but gave it another try. It was quite good in parts but there were some spots that the texture was a little too much for me. I decided to stay away from the tongue this time. Mind over matter is a great thing, but I was having a hard time trying not to think about how it was last time. After lunch I was showing Ólöf’ some of my grandpa’s photos on facebook. He only has about 10 from Iceland so we were just looking through when we stopped on one photo. She looked at it and said “that is my dad!”. Grandpa hadn’t written down who was in the photo so I wrote asking and Adda (my grandfather’s older sister) responded saying it was Guðmundur. Everyone here was looking at the photo and when Guðmundur got back from the fields we had him take a look and he knew exactly who grandpa was, where they were, which boat it was taken on. Everything. Of all the photo’s my grandpa decided to post, the fact that he posted this one is just so amazing. It’s pretty neat and really wild that this happened. Guðmundur talked about my grandpa a little saying that he was a good kid and he really liked him but he didn’t know what happened to him after he went away for school. 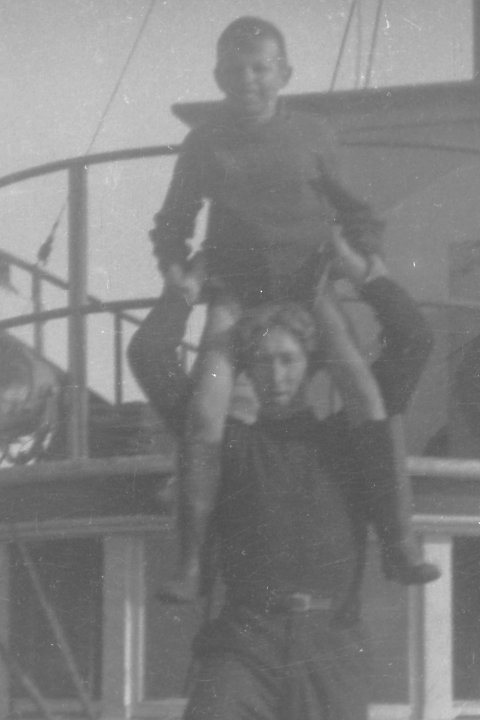 We’ve been showing the photo to everyone who has been coming by and today Ólöf”s brother saw it and said he had seen the photo before to which Guðmundur responded with something like “bull shit”. So someone grabbed a box of old photos and there it was, the photo of my grandfather and Guðmundur on the boat. Wild I tell you, just wild.

After milking the cows we went over to Halldóra’s house for birthday cake as it was her birthday too. It’s so nice that so much of the family lives so close together, its such a change from how I grew up. When we got back to the house Ólöf taught me how to knit properly and how to knit with colour! You have no idea how excited I was/am that I can now knit without dropping the needle and also add/change colours.

Yesterday I helped Ólöf babysit Halldóra’s children, she has twins, a girl and boy who are 1.5 years old and a son who is 6. They were quite the handful before lunch/their nap but super fun to play with and be around. I got a more hands on with milking the cows. I cleaned the teats and hooked up some of the machines and cleaned up the poop again. Helgi took me for a drive to see the farm I was going to be staying at and showed me another sheep herding pen. We talked about how everything happens for a reason and how glad I am to be staying with his family. When we got back to the farm we headed out to the fields and I helped wrap the hay again.

Funny side stories. This family sure does like their coffee, its like mom and dad… though I think mom and dad drink a lot more. The first day they asked me if I wanted a cup which I declined but Ólöf poured me one anyways. I hate to waste anything and if something is put in front of me I (almost always) will eat or drink it so I started to drink. Jón Þór laughed when he noticed and told his mom that I said I don’t drink coffee. It was good, but I know if I start to drink it I won’t be able to stop.

The other day I asked Helgi if people get sunburns in Iceland to which he laughed and said yes. The reason why I was asking was because, as you know, I always get sunburns and had yet to get burnt here… until that day. Not a bad burn by any means but you could tell that I had been out in the sun. I actually think I may be getting a bit of a tan?! I didn’t think that was possible with me!

Its been really nice living here, the family is all so wonderful and I’m so thankful for our welcoming they have been to me.

Now I’m off to visit Halldóra? I think?

* tölva means computer. Helgi has been trying to teach me some stuff and this word was one of the firsts… its so hard to say with my accent.