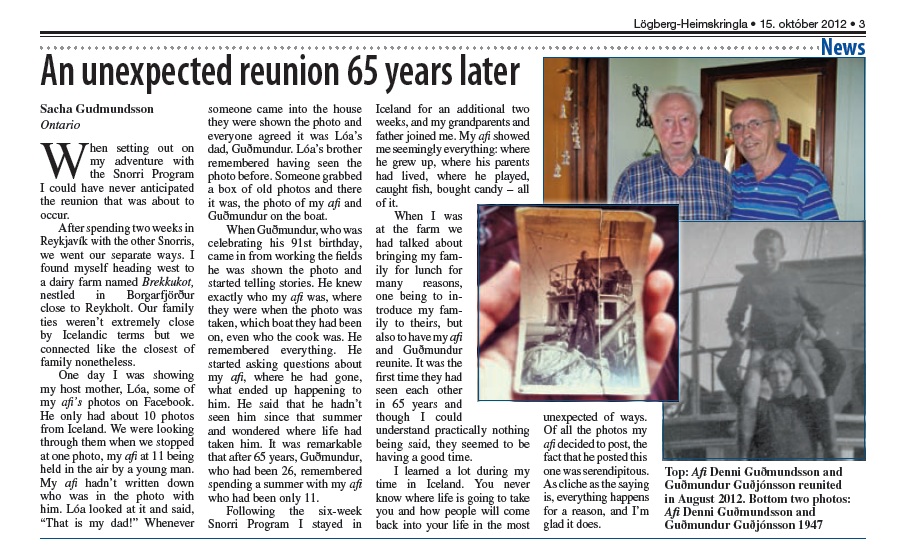 After participating in the Snorri program I was asked if I would write a story for Lögberg-Heimskringla. I took inspiration from a story I told earlier in my blog. Here it is.

When setting out on my adventure with the Snorri Program I could have never anticipated the reunion that was about to occur.

After spending two weeks settled in Reykjavik with the other Snorris, we went our separate ways. I found myself heading west to a dairy farm named Brekkukot, nestled in Borgarfjörður close to Reykholt. Our family ties weren’t extremely close by Icelandic terms but we connected like the closest of family nonetheless.

One day I was showing my host mother, Lóa, some of my afi’s photos on facebook. He only had about 10 photos from Iceland. We were looking through them when we stopped at one photo, my afi at 11 being held in the air by young man. My afi hadn’t written down who was in the photo with him. Lóa looked at it and said “that is my dad!” Whenever someone came into the house they were shown the photo and everyone agreed it was Lóa’s dad, Guðmundur. Lóa’s brother remembered having seen the photo before, at which point someone grabbed a box of old photos and there it was, the photo my afi and Guðmundur on the boat.

When Guðmundur, who was celebrating his 91st birthday, came in from working the fields he was shown the photo and started telling stories. He knew exactly who my afi was, where they were when the photo was taken, which boat they had been on, even who the cook was. He remembered everything. He started asking questions about my afi, where he had gone, what ended up happening to him. He said that hadn’t seen him since that summer and wondered where life had taken him. It was remarkable that after 65 years, Guðmundur who had been 26, remembered spending a summer with my afi who had been only 11.

Following the 6 week Snorri Program I stayed in Iceland for an additional 2 weeks at which point my grandparents and father joined me on my adventure. My afi showed me seemingly everything: where he grew up, where his parents had lived, where he played, caught fish, bought candy – all of it

When I had been staying at the farm we had talked about bringing my family for lunch for many reasons, one being to see them and introduce my family to theirs, but also to have my afi and Guðmundur reunite. It was the first time they had seen each other in 65 years and though I couldn’t understand practically anything being said, they seemed to be having a good time.

I learned a lot during my time in Iceland. You never know where life is going to take you and how people will come back into your life in the most unexpected of ways. Of all the photo’s my afi decided to post, the fact that he posted this one was serendipitous. As cliche as the saying is, everything happens for a reason, and I’m glad it does.