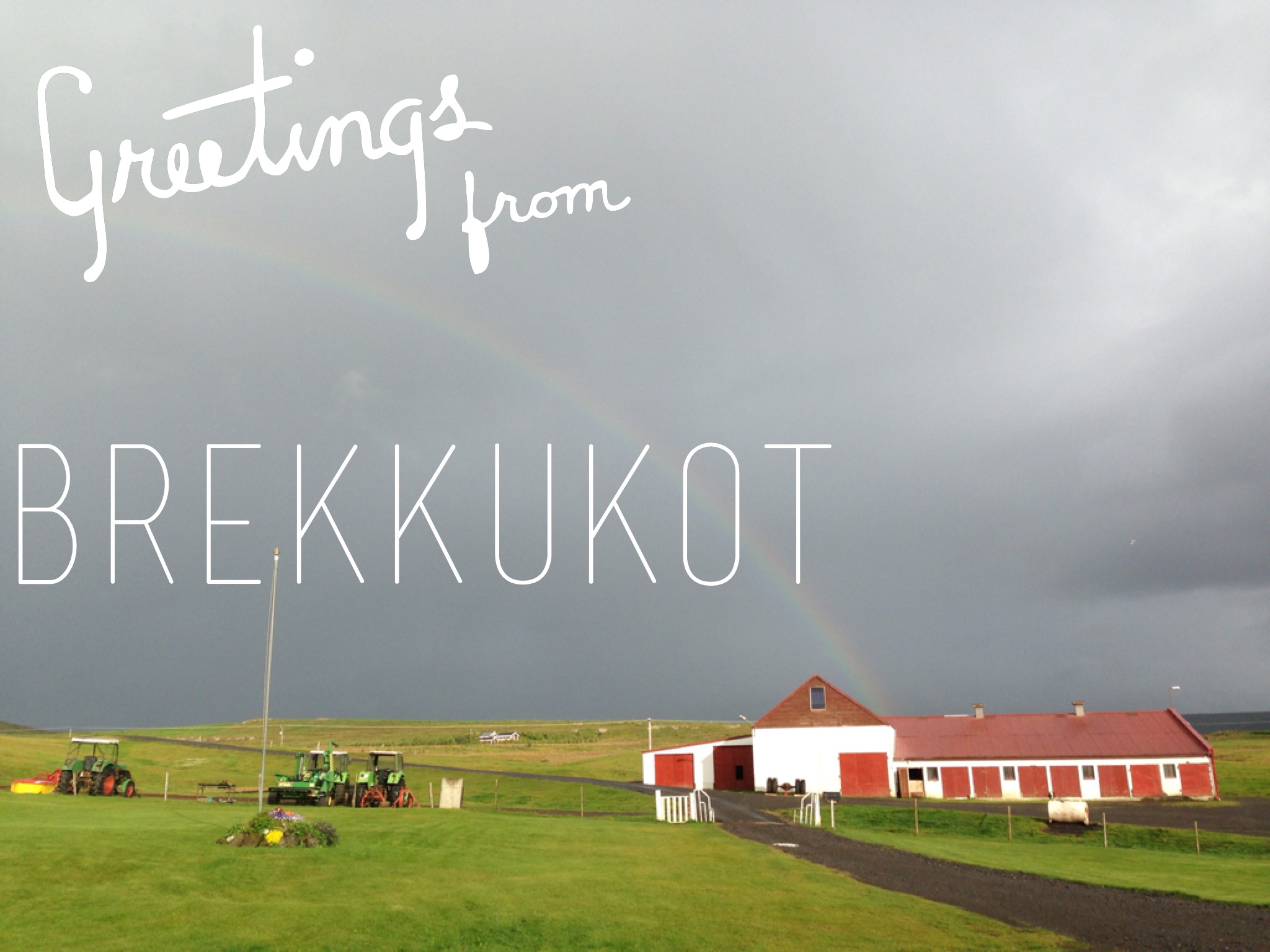 I arrived in Iceland last Saturday. Hard to believe I’m back so soon, it doesn’t feel like a year’s past already. Anyways, let’s get to an update shall we?

My flight leaving Toronto went really well and I actually was sat in a business class seat. Yay for comfort! When I arrived at the airport I met up with Jón Þór and we made our way into the countryside. After a little nap it was time to make our way to Brekkukot for Gummi’s birthday celebration. It was a night of good food, music and dancing. With the flight and being surrounded by so many people speaking Icelandic I was pretty tired but had fun time.

There was lots of Icelandic and English music. Three English songs really stood out to me – 1. Billy Ray Cyrus’ Achy Breaky Heart. 2. Gloria Gaynor’s I Will Survive – my go to karaoke song and 3. Daft Punk’s Get Lucky. By no means at all was I expecting to hear that song played, it was glorious. 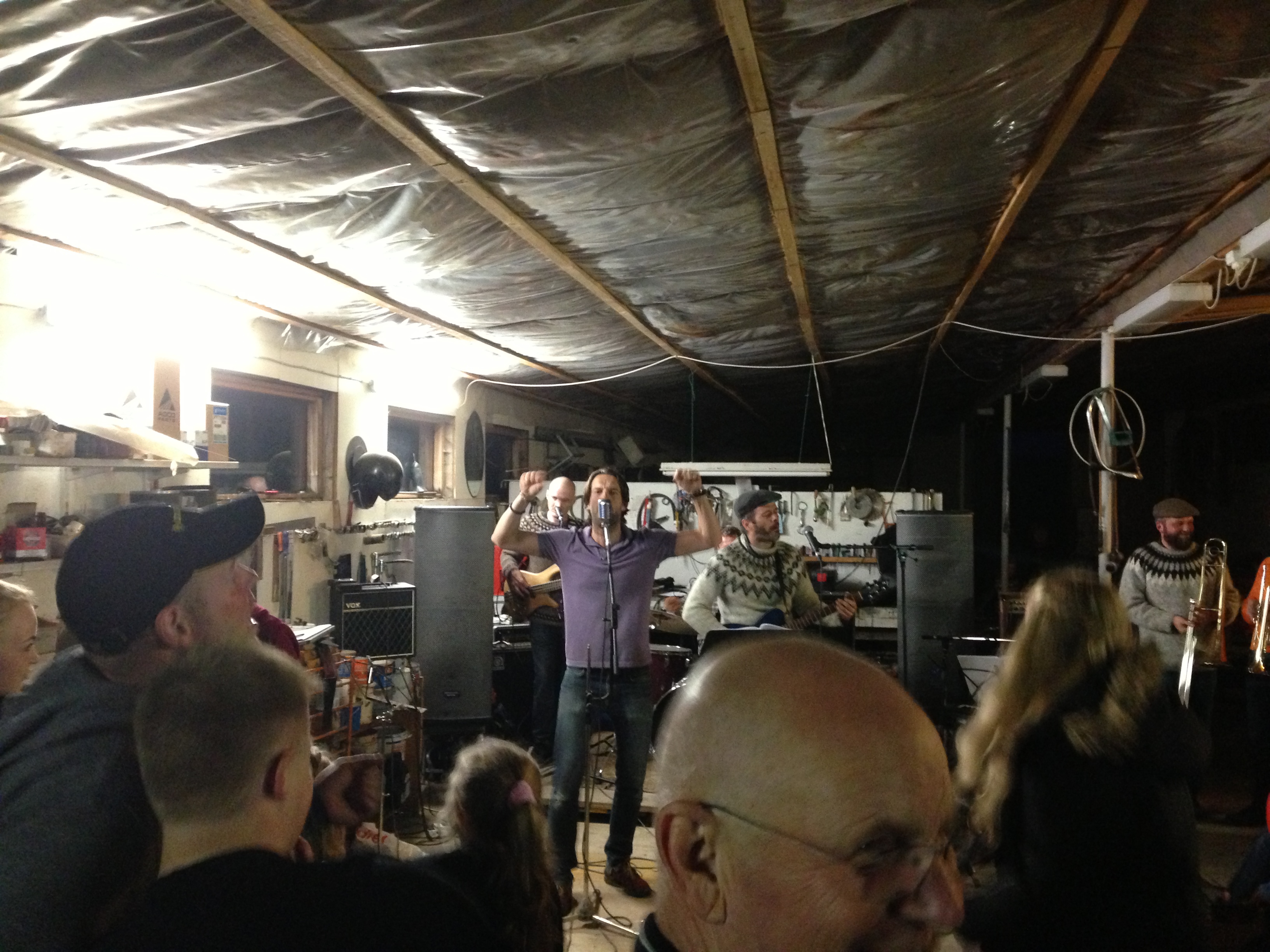 There was also a huge bon fire. 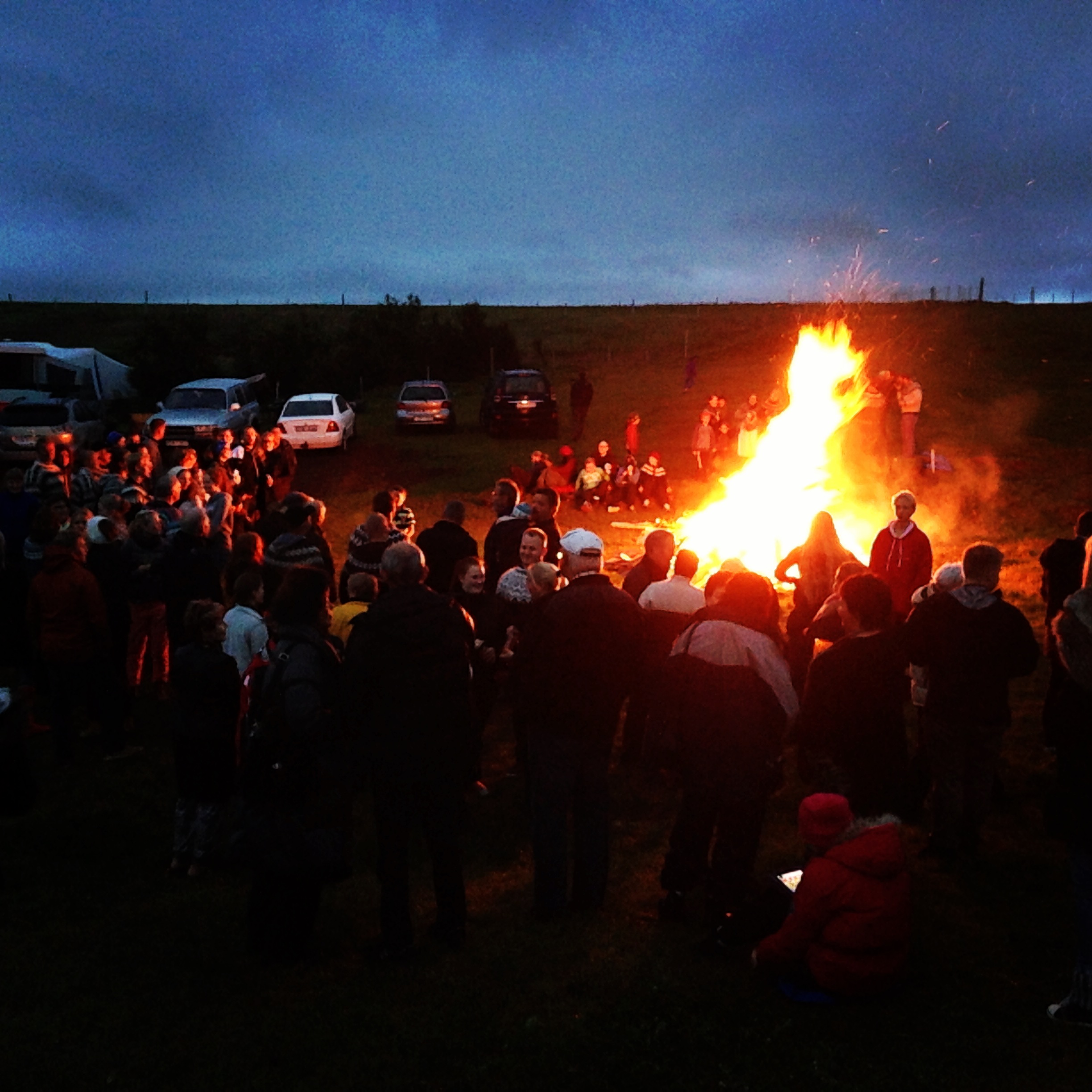 I spoke with two men in their late 80’s who told me about a two or three day horseback riding trip they had taken a couple weeks earlier. The one man told me the secret to his health is that he has stayed active. I heard that again and again last summer and will keep working to stay active in some way thought my life – I have to keep away my sciatica somehow anyways, eh?

It was a fun night. People didn’t get too rowdy but I did see a man walk over to his friends, a little unsteady, walk away and then moon them. I talked about this the next morning and it turns out he is one of Iceland’s very well known actors.

On Sunday I woke up to a big North American style breakfast. Then made our way to the farm. I’ve got to say my brain was really starting to hurt with trying to understand the conversations around me. It’s pretty exhausting to listen to a conversation for the few words  you might understand and then try to put together what might be being talked about. After a little while I decided to take a walk around the farm and along the river. 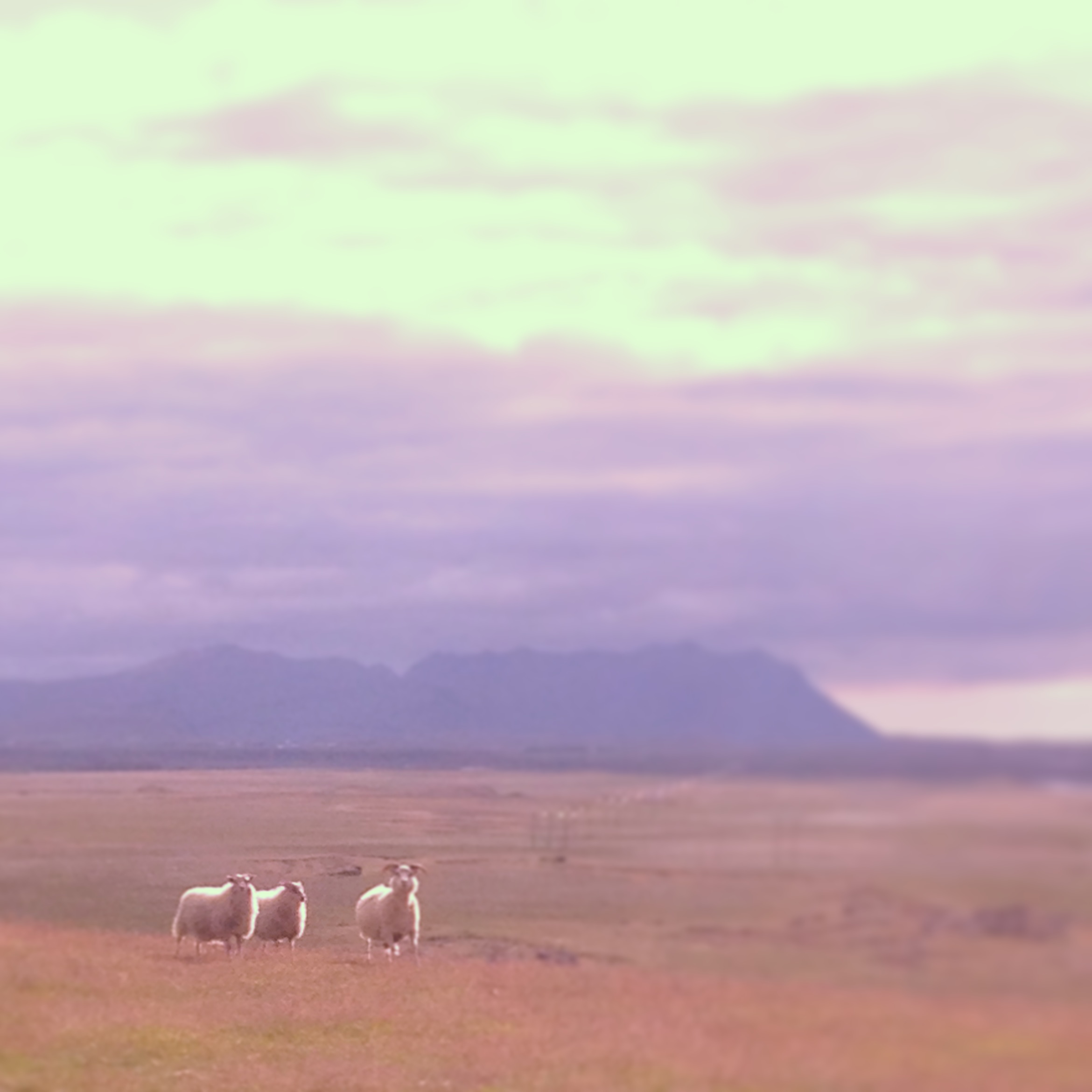 Nice and peaceful. I let my brain go blank and just enjoyed the land.
I played with Gummi’s son and it seemed as though he knew I didn’t speak Icelandic. He pointed at things and said words repeatedly for me. He tried to tell me what the different vehicles were called. He kept asking my my name and I would respond to him, asking his. Kids are great. 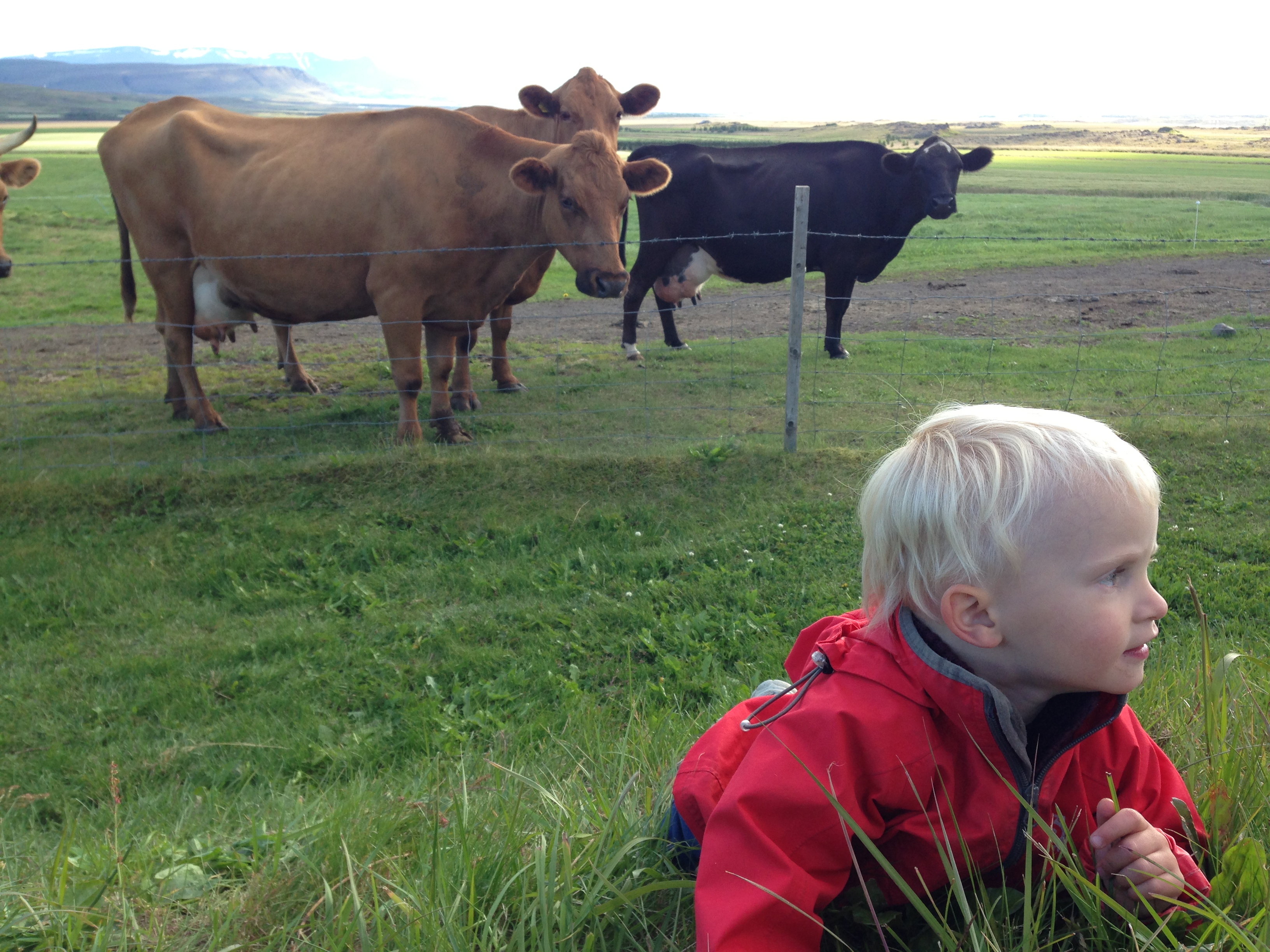 The day wrapped up with dinner, a trip to Halldóra’s place and then a little adventure drive with Jón Þór and his boys. We stopped along the road to take in the view and visited a river famous for salmon fishing. 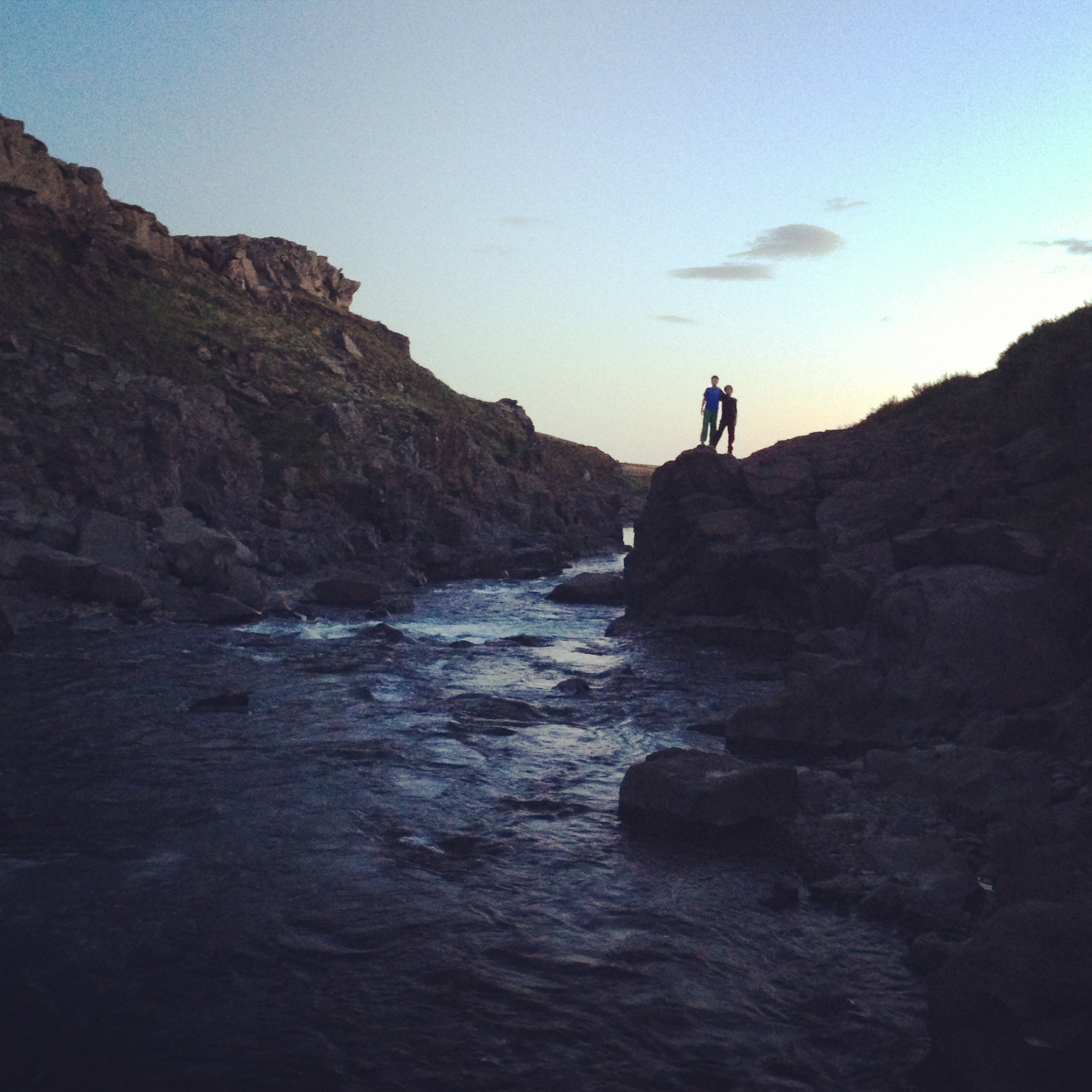 Monday was a lazy morning. We took a trip to Borgarnes for groceries and lunch at a cafe overlooking the ocean with a gorgeous view. The twins tried to help me learn Icelandic in the grocery store. I was learning colours and names for different foods though I could hardly pronounce them correctly and can’t really remember them now. The number of words with an “r” sound! Oh brother!
We made our way back to Brekkukot for waffles and the kids went horseback riding. 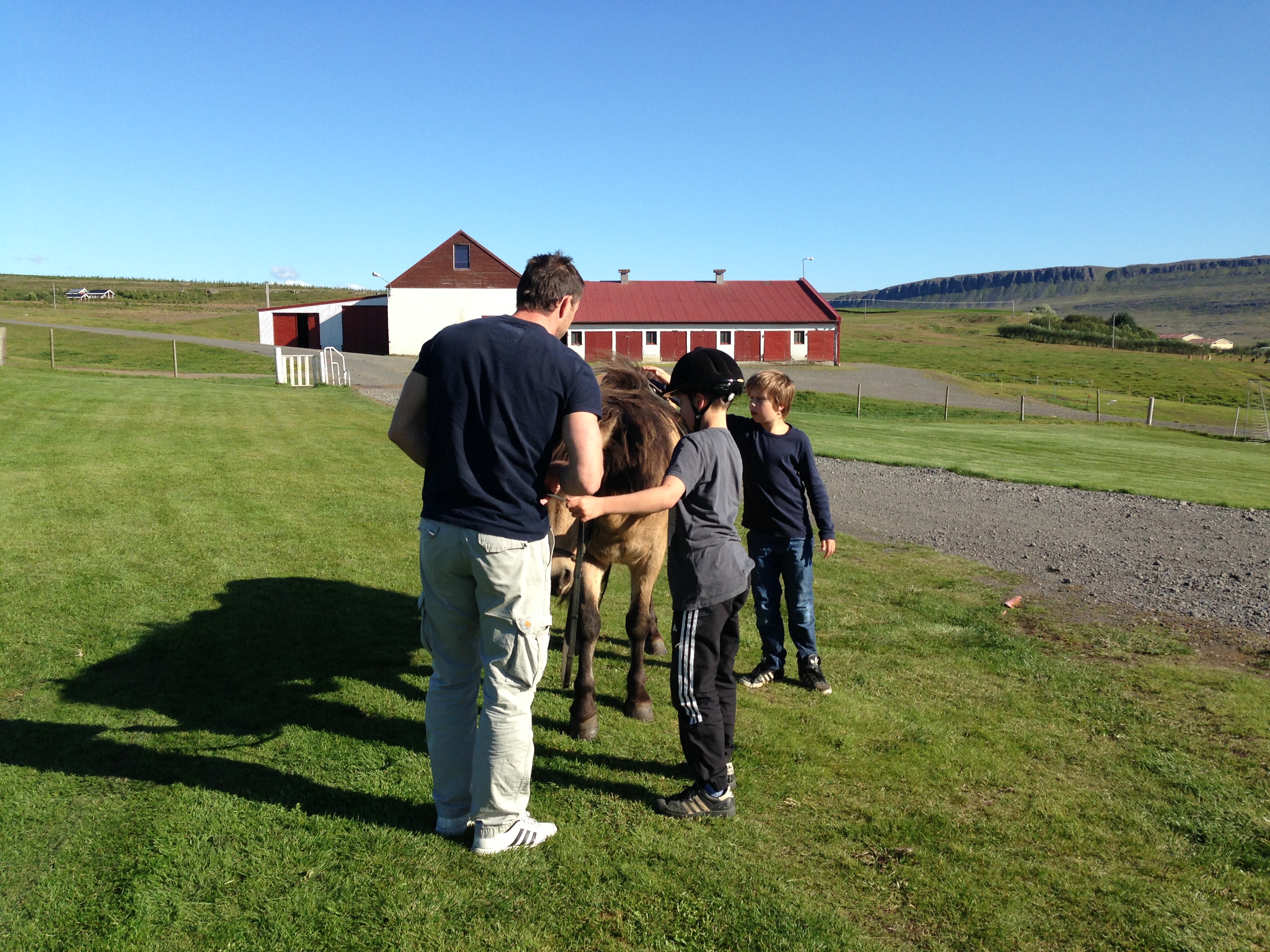 After dinner we took a walk through the ‘forest’ and around Reykholt. 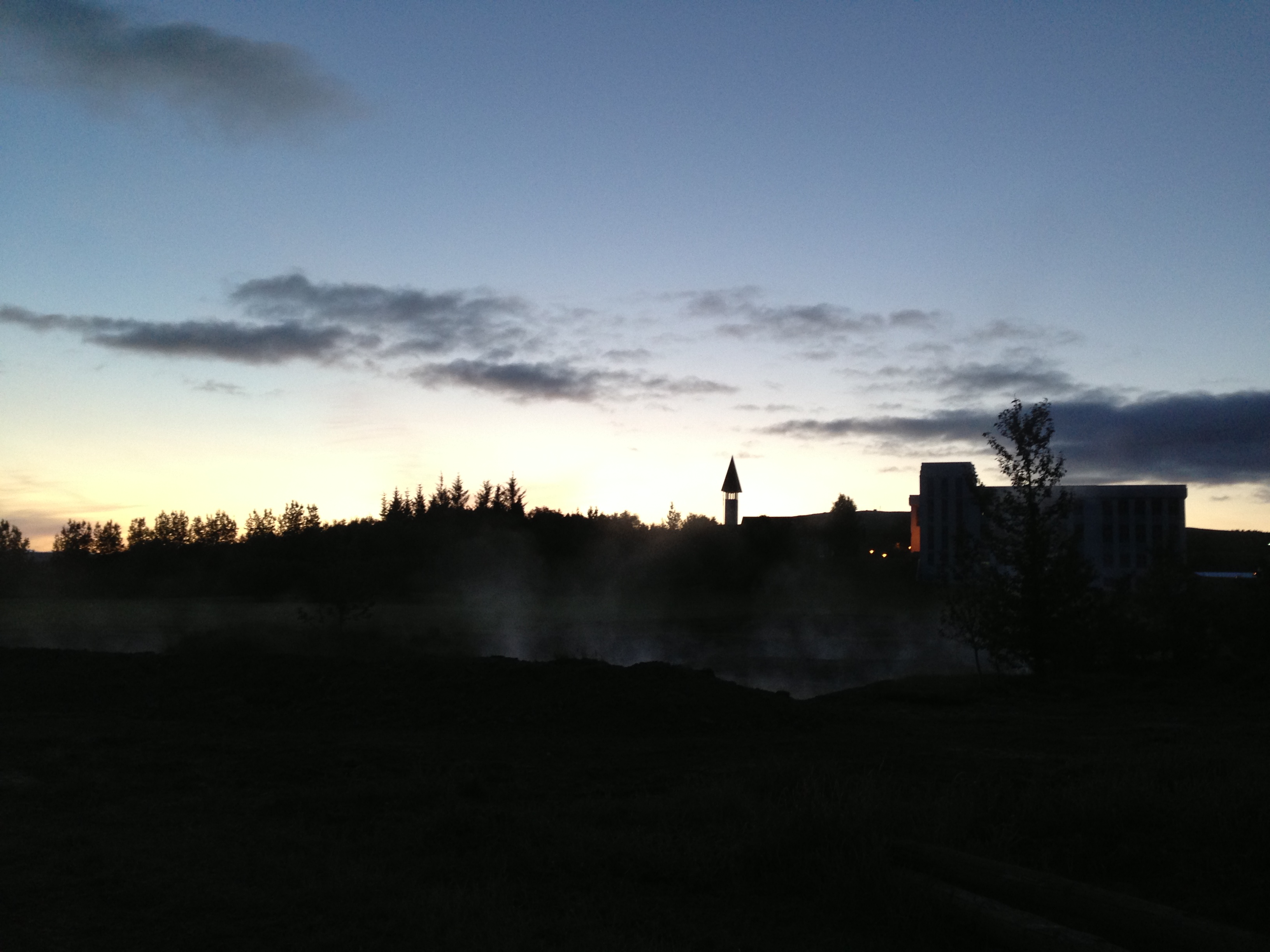 On Tuesday I started to feel like I was understanding a lot more. I may not have been understanding the words exactly but I was getting the gist of some conversations, jokes even.
I went to Brekkukot to stay with Lóa and the family. When I arrived she had started a knitting project so that I could learn how to make cables. She then decided to teach me how to knit socks! So great!
I continued working away on the socks Wednesday. Took a trip around the farm and drove to Hvanneyri with Lóa to see a knitting shop. I  wasn’t ready to buy wool but decided to buy buttons instead for a new lopapeysa. 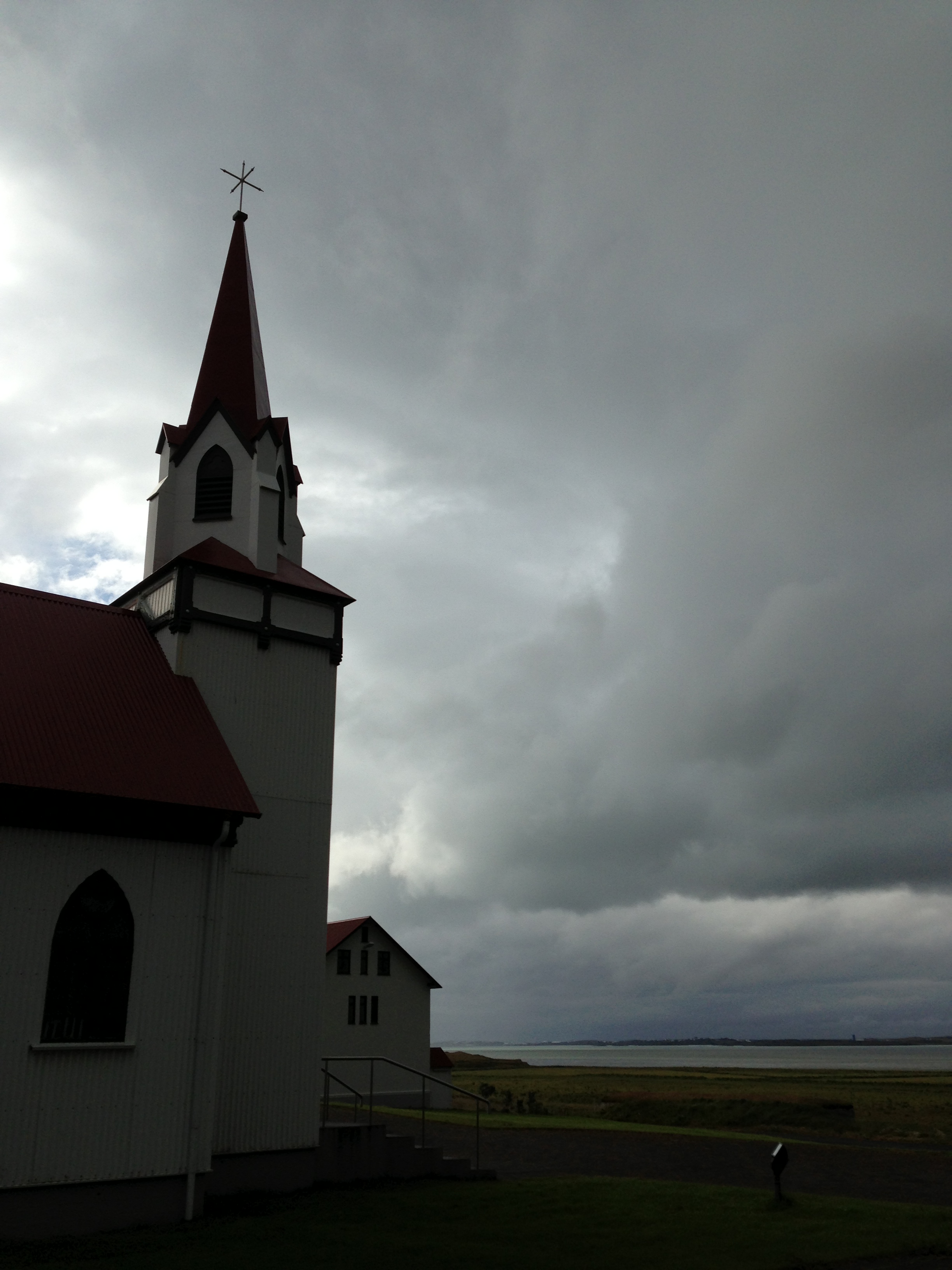 That night I joined Helgi to herd the cows and went for a little hike with Jón Þór. I found out my shoes are not water proof, but regardless of that it was a great hike with equally great conversation. 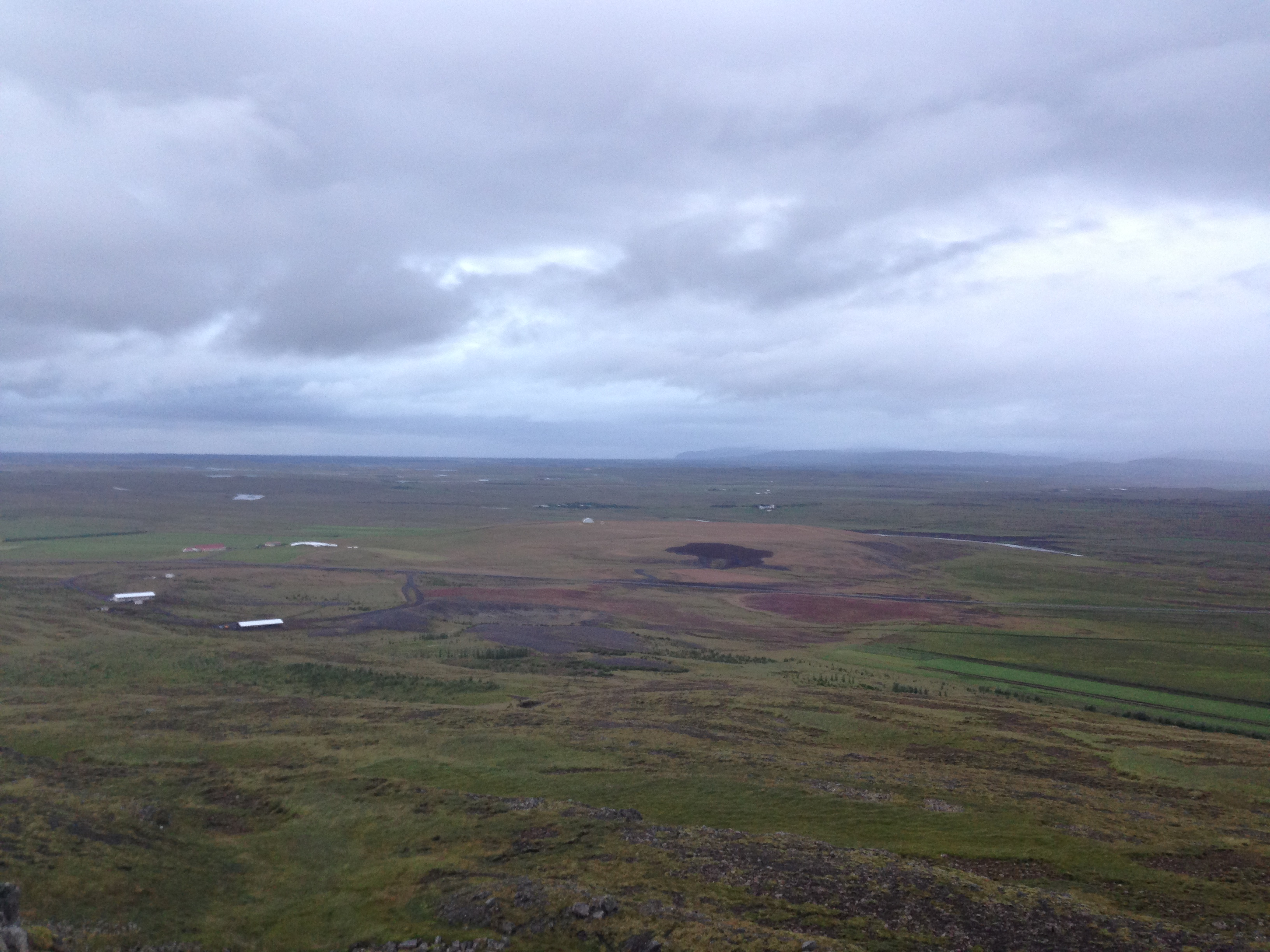 On Thursday I finished knitting the socks! Woo! I hope I remember how to do it! 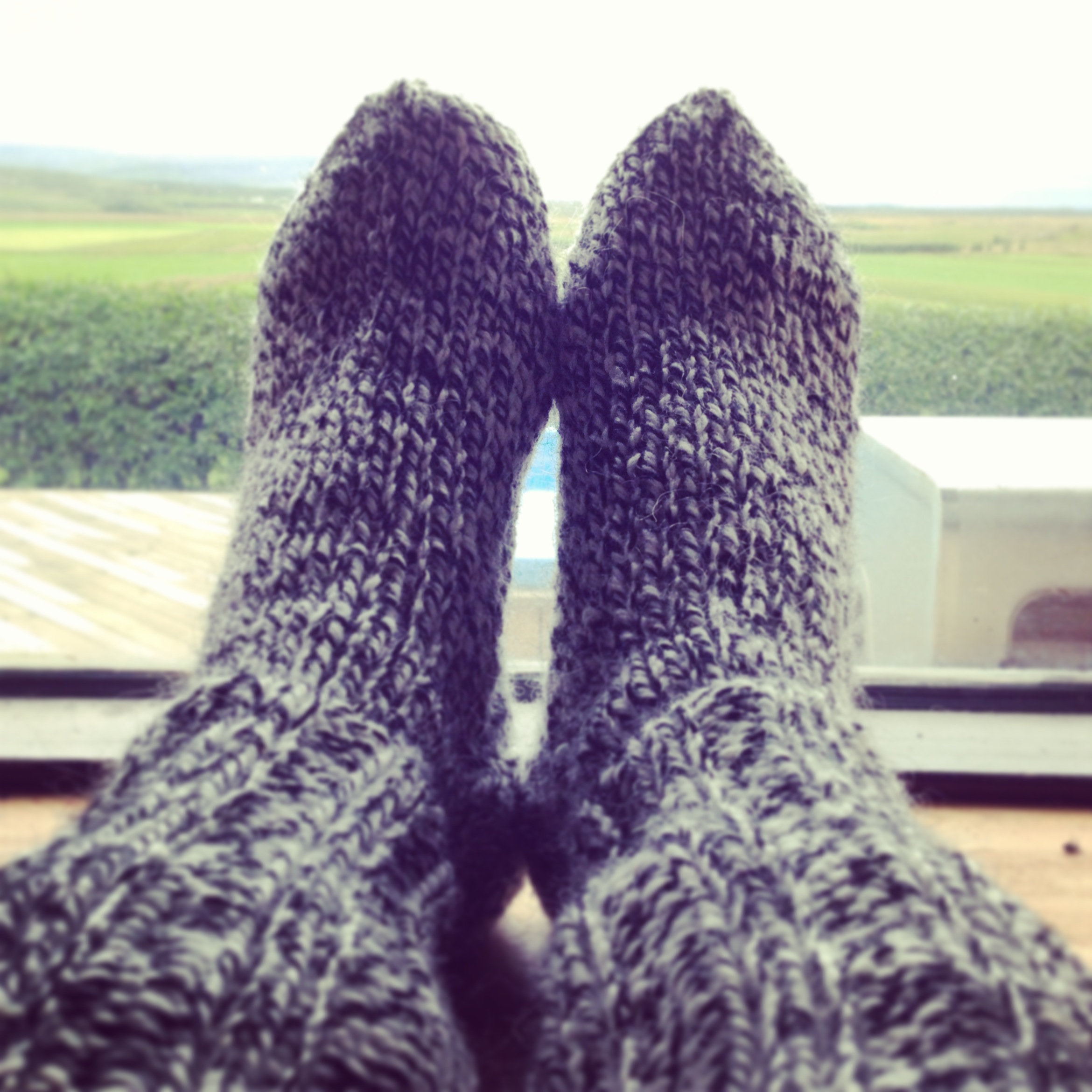 Helgi took me for a little horseback riding trip which was so much fun. I rode twice last time and had only been on a horse maybe once before in Canada. We followed the path along the road, crossed a river, went under a bridge. Super fun. I think I did ok. I’d like to ride horses more if I could, it was great fun.

That afternoon Halldóra came over for a nice chat and the kids were so friendly with me. Laufey, who’s two, was so sweet and chatty with me too. That night I had a really nice talk with Lóa just about life in general and then we spent some time in the hot tub.

Said goodbye to Brekkukot (at least for a little while) on Friday and drove to Borgarnes with Lóa as she had an appointment. I walked around the town a little and found myself by the ocean taking in the view across the fjord. 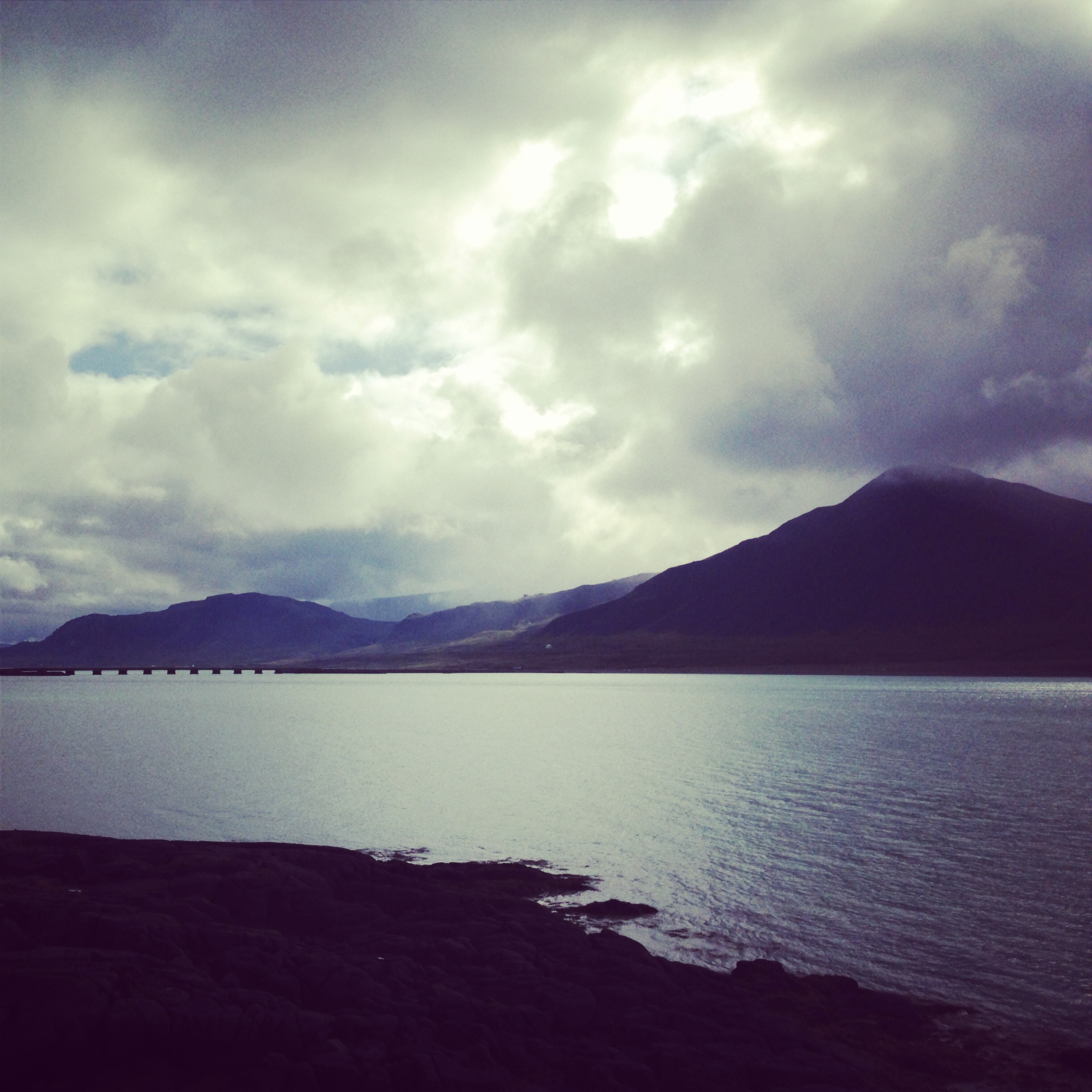 We then drove to Akranes, where I am now, so that I could stay with my family here. Alexandra, her mom and sister were waiting for me at the bakery.  Lóa said she hopes I can stop by Brekkukot before I leave. Who knows, maybe I’ll end up there for a couple more days! 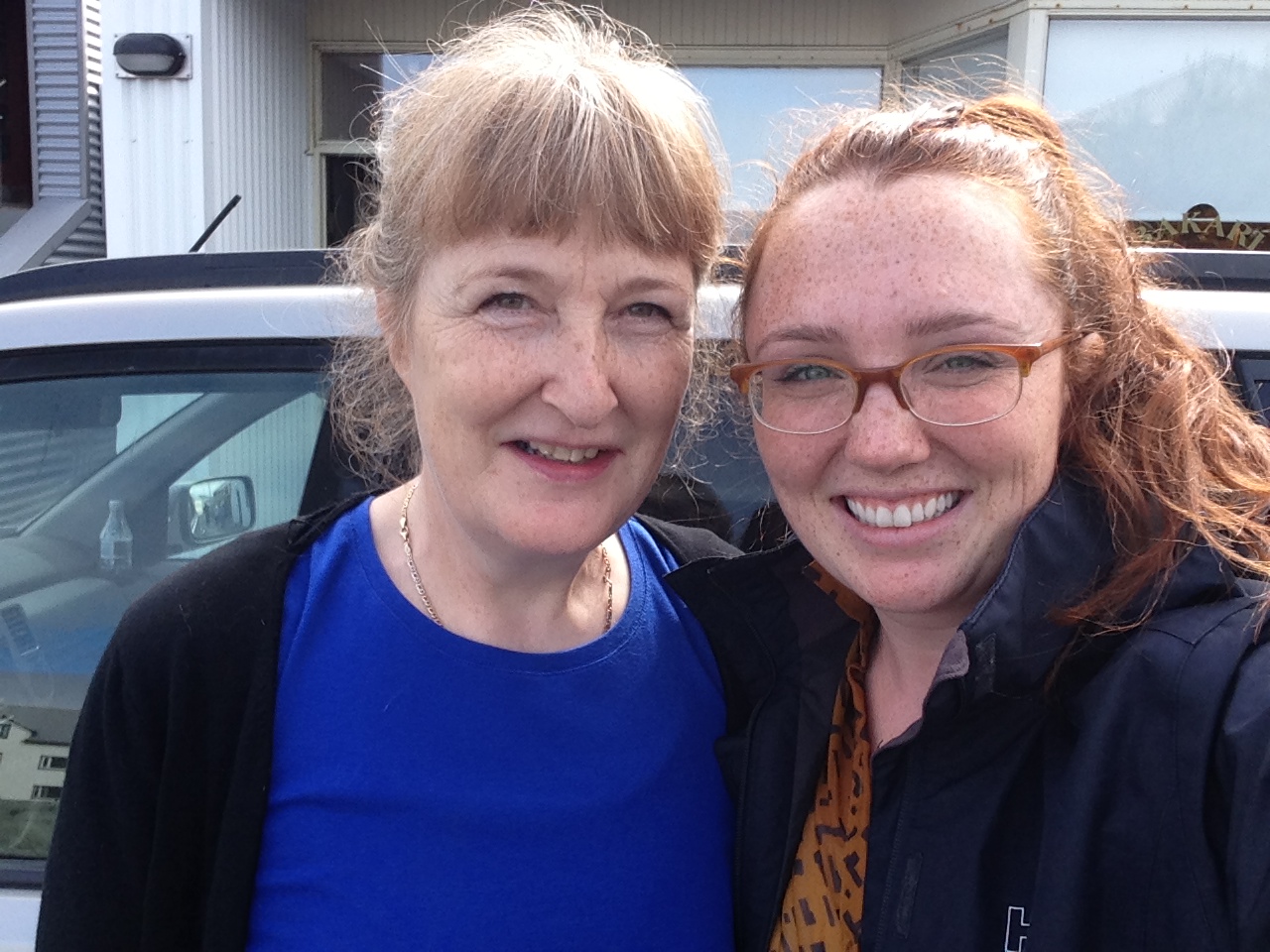