I’ve been daydreaming a lot about Australia recently so I suppose it’s a good time to start writing about our honeymoon, right? Only a bunch of months later…. We got a lucky upgrade to business class on our flight from Toronto to Vancouver which was a treat that may have been tossed up to me with my walker and Matthew, rather loudly, talking about our honeymoon #smooth. Our flight from Vancouver to Brisbane went smoothly. We were pretty tired out from the wedding the night before so we were able to grab a couple good hours of sleep on the long flight.

We left Canada on a Sunday and landed on a Tuesday morning in Brisbane and went to pick up our rental car. The fine folks at the rental company suggested we stop in Nundah for a coffee to avoid the rush hour traffic which we were happy to follow given the jet lag and left-side-of-the-road-driving. We ended up heading to Perks Cafe and I grabbed a super tasty vegan banana bread. 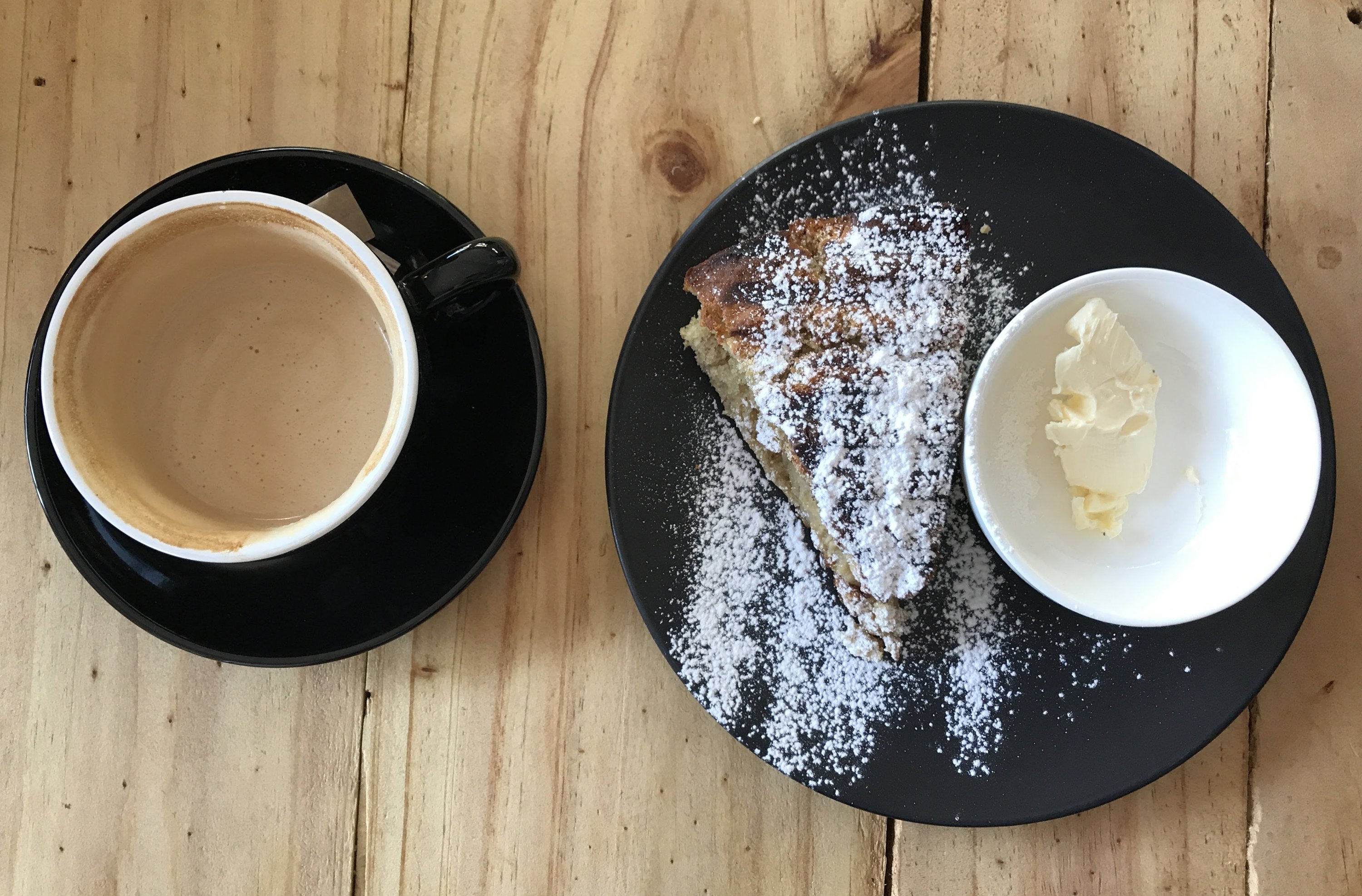 After a quick jolt of caffeine we hopped back into the car and attempted to figure out where exactly the hotel was… it took much longer than we hoped but we finally got there, boy oh boy was it nice! Matthew really wanted to splurge on the honeymoon so he opted to pick our first hotel and I had no say. Gotta say, he made a great pick.

We stayed at the Treasury Heritage Hotel in one of their suites for three nights. By the time we got to the hotel, we were exhausted and needed to take a quick nap before exploring. After a couple hours catching some zzz’s we made our way down to the river and hopped on the CityHopper ferry, a ferry that lets you see the city by boat for free. It was technically still winter at this point in Australia so the sun went down around 5pm which made it more chilly than we were expecting but given our jetlag, we were ready to have an early dinner and then call it a night. I may or may not have fallen asleep on the ferry back to the hotel (I did) and I may or may not have woken up at midnight waking up Matthew in a panic thinking it was noon and we missed a full morning (I did). Seriously, jet lag is a wild ride. 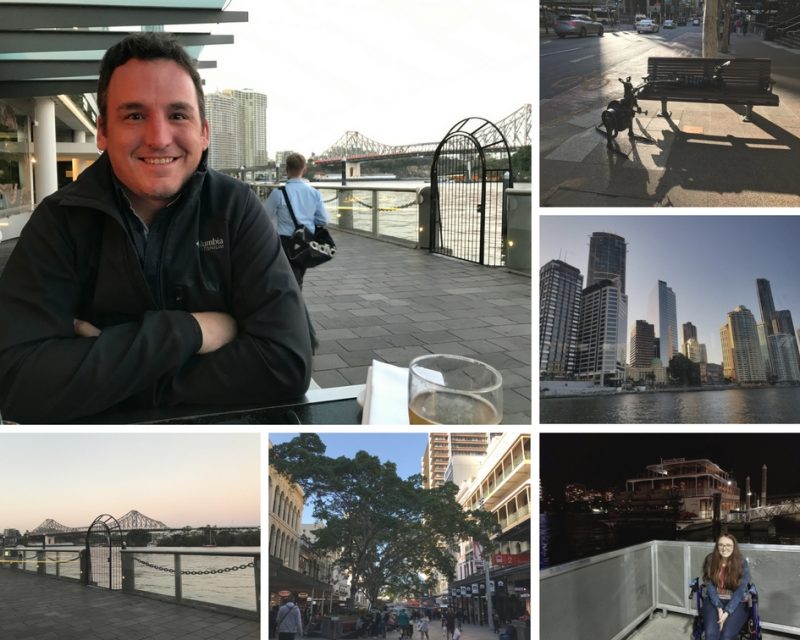 The next morning I was up to watch the sunrise and waited patiently for Matthew to wake up before we made our way to the Queen Street Mall, a pedestrian mall where we grabbed coffee and breakfast. After that, we set off to visit Lone Pine Koala Sanctuary, the world’s oldest and largest Koala rescue centre. We were able to ask employees a lot of questions and learned a lot about the different animals. And we got to see the koalas and kangaroos which has been a lifelong dream. 🙂 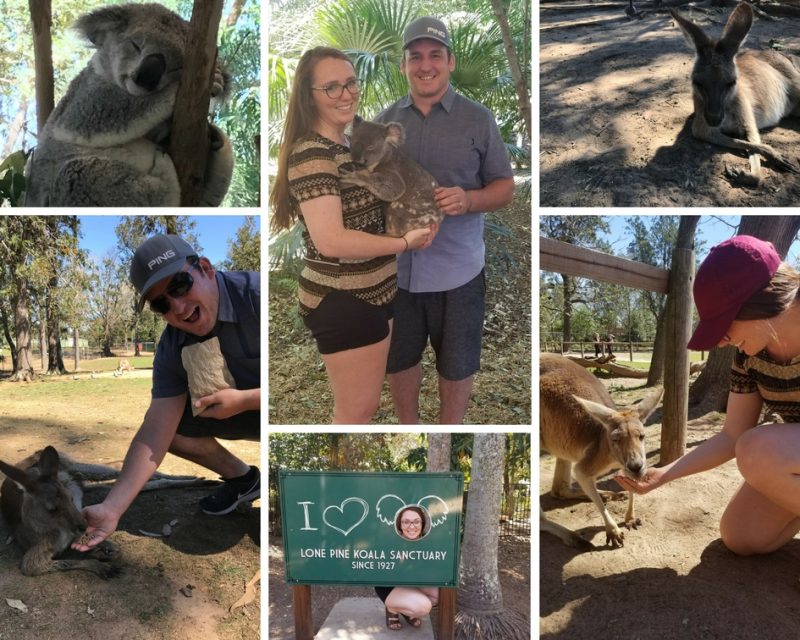 From the sanctuary, we made our way to the Gold Coast to spend some time by the ocean. The weather was amazing! We watched some surfers and I put my toes in the water and just enjoyed listening to the waves. 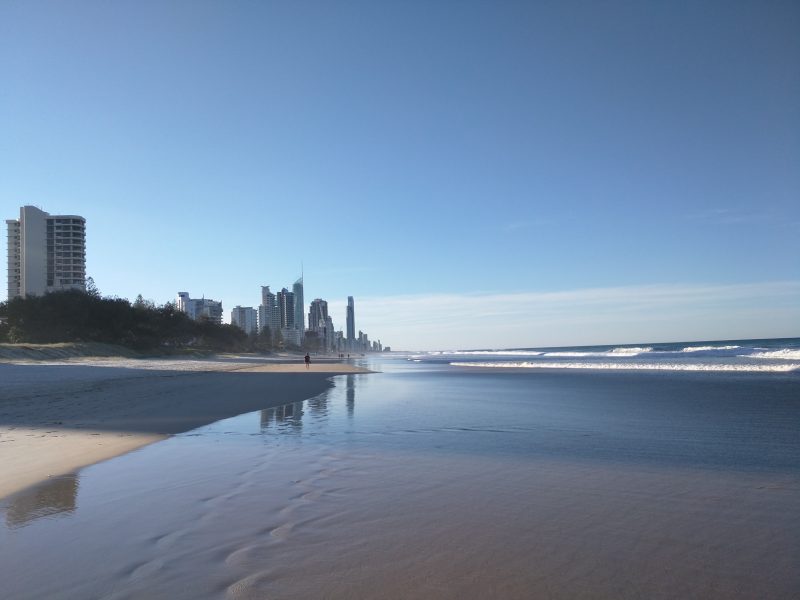 Before we made our way back to Brisbane, we stopped at Feed the Earthlings. Seriously. OMG! It’s a takeaway shop with a couple seats focusing on burgers and pizzas. I grabbed their “Burger with the lot” which was hands down the best burger I’ve ever had. No joke. Their patty was topped with “cheesy melt and a crispy rasher” which is some kind of veggie bacon, pineapple, beetroot, lettuce, pickles, tomato, grilled onion, tomato and BBQ sauce. I think I’m going to have to reach out to them about the patty they used too because it was an all-around 10/10. We spoke with the owner and I couldn’t hold back my raving. It really was the best burger. So good! So so so good that I don’t mind showing you these pictures that Matthew took while I ate it. 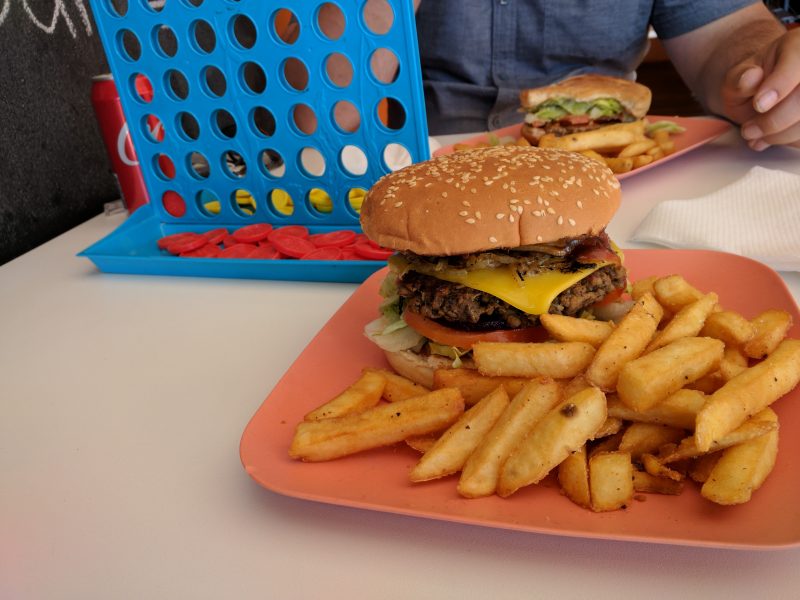 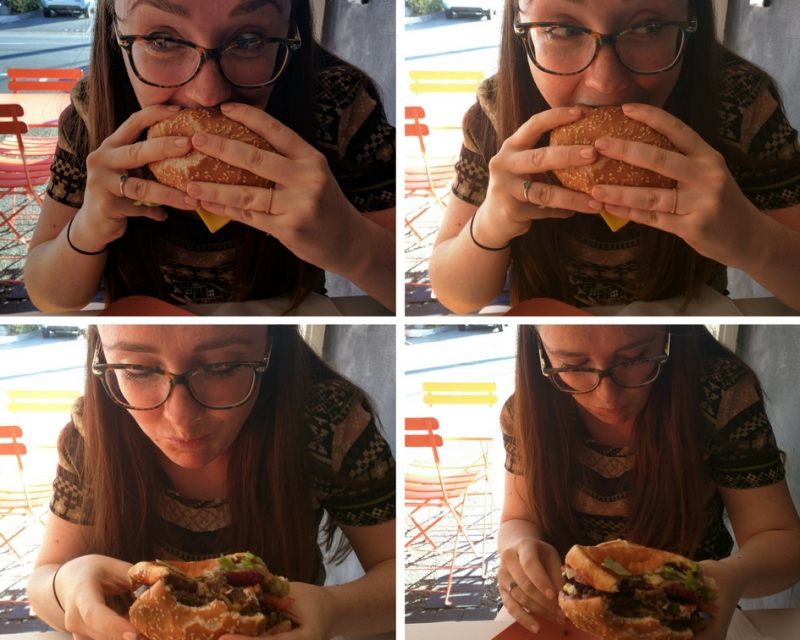 After that, we got back on the road en route to Brisbane listening to Hamish & Andy while we drove. I had been listening to their podcast since being introduced to them by my Aussie friends while studying in Quebec City so, it was pretty great to hear them on the radio. When we got back to the hotel watched some Aussie TV… hello Australian Survivor!

The next day was our last and we wanted to make our way up towards the Sunshine Coast. We asked our concierge what they thought the best route would be and he suggested that we drive into the hinterland towards Maleny and Montville. We look back at this day very fondly. We had such a great drive, the landscape was absolutely incredible and we were snapping pictures all the time. We stopped into Montville for our mid-morning breakfast at Mountain Bean and they were so lovely to us! It was a great veggie breakfast! 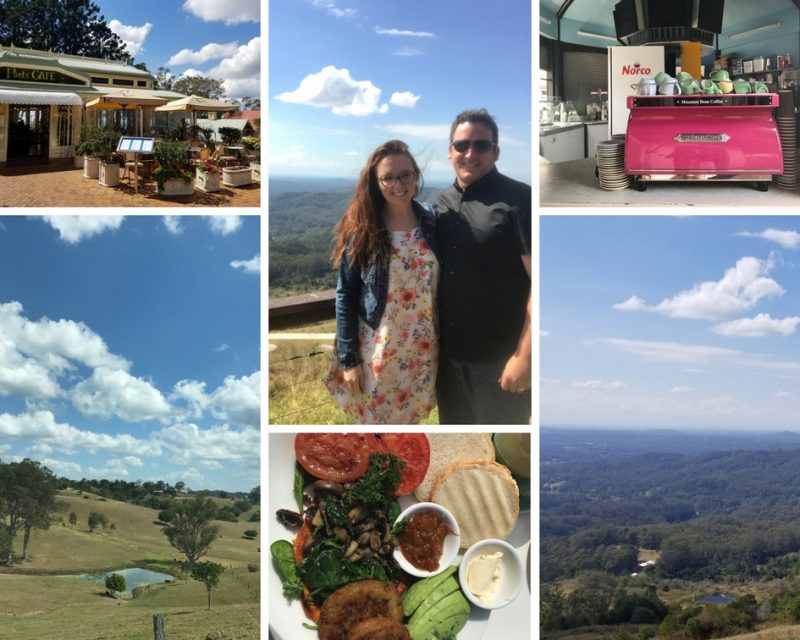 After taking our sweet time, we made our way back to the car and towards the Sunshine Coast. For the afternoon, we decided to just make random stops along the way jumping from beach to beach to beach. It was beautiful! 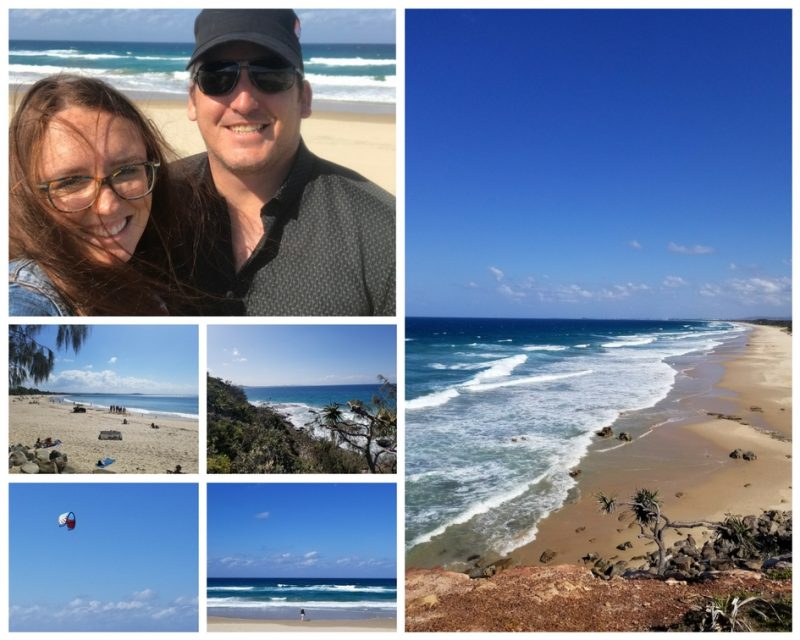 When we made our way back to Brisbane, we stopped at the lookout to catch the sunset and grabbed a coffee before our final dinner. 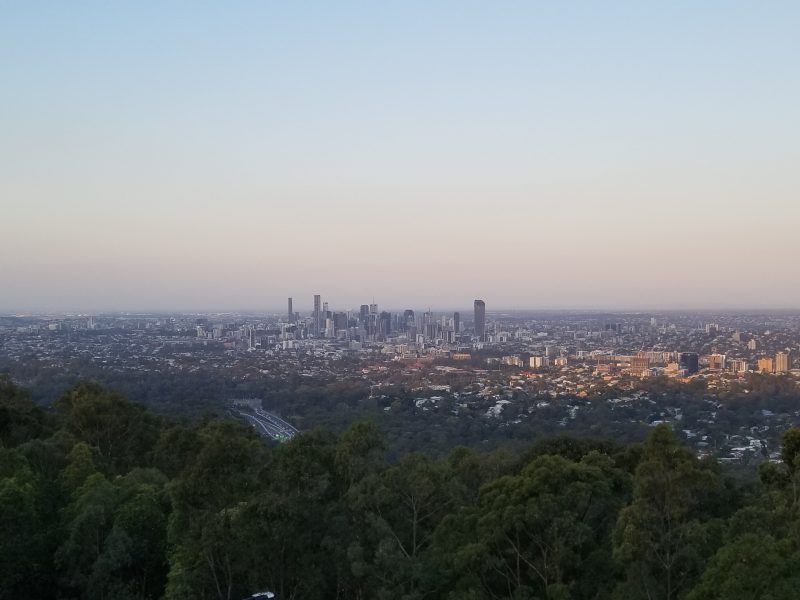 And just like that, our time in Brisbane came to a close and we were off to Melbourne! More on that next time! 🙂